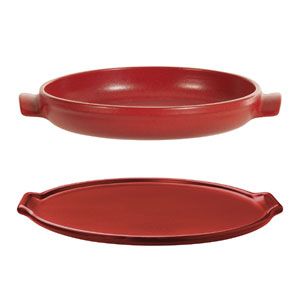 Skip to the beginning of the images gallery
Details
The aroma of baking apples, sugar and butter caramelized and hidden under a bubbling, browning pie crust can make anyone salivate - it's the magic of the Tarte Tatin. Tarte Tatin is a dessert revered the world over. Emile Henry presents an authentic, Tarte Tatin baking dish designed to make this irresistible, legendary dessert a one-pan, any- night-of-the-week treat. The apple Tarte Tatin, and its many fruit and vegetable variations, is now easier to make then apple pie. A Tarte Tatin can be made with seasonal fruits such as the traditional apples but also mango, pineapple or pear and from vegetables such as tomato and onion. A winter vegetable Tarte Tatin favorite is made with leeks, carrots and turnips; a summer favorite includes zucchini, eggplant, garlic and goat cheese. The common thread between all Tarte Tatin's is the pie crust or phyllo dough on the top that later becomes the bottom when the tarte is inverted and served.
More Information
Reviews
Write Your Own Review
Only registered users can write reviews. Please Sign in or create an account
More from Emile Henry
Copyright © 2019-present Premier Gourmet. All rights reserved.